Antonio Brown Helmet Saga is too smooth for "Hard Knocks" 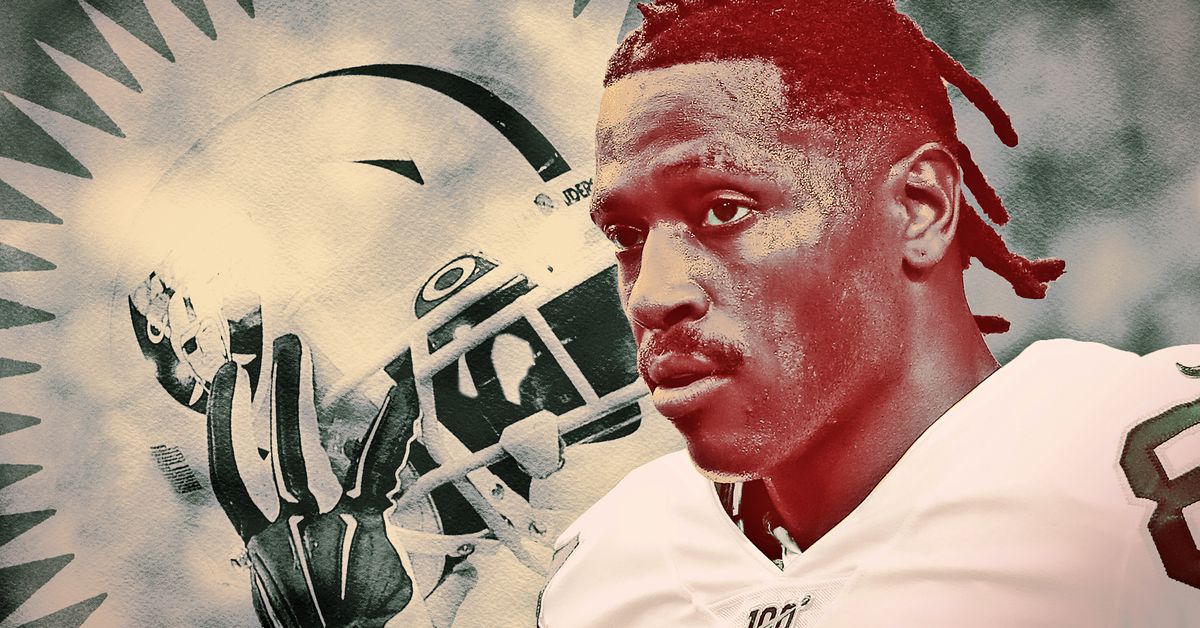 The Raiders have one more season to play in Oakland before boarding Las Vegas. This year, HBO's Hard Knocks Raiders will follow through their training camp for the season, and we will break down each episode. "There is no whining about football," the report says, "but every August football comes to the wine country." And how!

Even Hard Knocks can't keep up with Antonio Brown's whirling winds. helmet drama. Episode 3 seemed spectacular after the Hard Knock's cameras chased the eye of one of the NFL's strangest storms over the past year and a half. In that interval, Antonio Brown got his helmet story revealed dropped his complaint to wear the helmet, tweeted that he would swap a signed helmet for a newer version of the helmet he wants to wear, returned to training for the Raiders, learned that his helmet loophole had been rejected, stopped practicing, filed a second complaint against the NFL and had been publicly chewed out by General Manager Mike Mayock.

"It's time to be all in or completely out," said Mayock

It seems impossible for the people producing Hard Knocks . Whether Brown's story moves so fast or Raiders flex his muscles over HBO's editorial choices, the show has not revealed the depth it can with regards to helmet port. There were no revealing pictures of the possibly homemade color cast helmet that Brown reportedly tried to wear earlier this month, and there were no boiling frustrations between head coach Jon Gruden and Brown. Instead, this section focused on the good vibes that Brown shared with Gruden on a handful of days between when Brown thought he could wear the helmet (August 13) and was told he couldn't (August 17). We don't have many answers after Tuesday or satisfying revelations, but we have plenty of fun anecdotes.

A bunch of players who do stupid warm-ups are interrupted by a dramatic input that says, "See who's finally ready to play. “A slow motion shot from Brown's ridiculously expensive shoes to a faint smile, and then Brown spends the rest of the practice dunking on his teammates while everyone is watching starry and R&B music playing. The only difference between the Space Jam scene and Brown's introduction to Hard Knocks is that the tight end of Luke Wilson's calves is smaller than the Daffy Ducks.

Brown even has his version of Michael's secret stuff. He drinks from a green Gatorad bottle during the workout and can't focus on anything other than how delicious watermelon and berry-flavored sideline crunch that one of the assistants is for him.

"This shit is sick," Brown says. "Keep this shit off the fucking cooler."

The assistant keeps his word, because Brown is on the sidelines for the team's spring season game against the Arizona Cardinals, handing out drinks and telling people it's his secret quest, and offering it on stones.

Anyone who can angle to Brown wants to know about how his feet, which were frozen bit by cryotherapy. Problematic guard Richie Incognito continued his newfound friendship with Brown and made some small talk before shooting himself.

"What are they doing to your feet?" Incognito asked. "Oils and crap?"

Browns shook his head. "Cut off the skin."

Brown's attitude is new skin, new me. "Too much noise right now," Brown says one-on-one with the cameras. "More work, less noise." (It's important to note that he would stop practicing for a few days after this announcement.) He adds that he feels like "the enemy in the fucking state."

The section ends with a police officer -out. Brown's attempt to exploit a regulatory hole and wear a newer version of his old helmet is blocked, and once again he stops practicing. This story is not told through the scenes, but rather via NFL Network clips, a Mike Mayock statement that had already been on social media for two days, and a voiceover explaining that the good vibes we saw by Brown on practice had ended.

The episode does not delve into the subject of Brown's helmet issues, the potential medical consequences of him not wearing approved equipment, or any of the rancor between Gruden, Mayock and Brown – a stark contrast to last year's Cleveland Browns when the link between head coach Hue Jackson and offensive coordinator Todd Haley were evident. It's possible the Raiders are flexing their control over the editorial process more than their predecessors: As Peter King wrote in his column this week on Pro Football Talk "I've said this several times: Jon Gruden and Mike Mayock want have no part of Hard Knocks and since teams have the opportunity to see the upcoming show before it is broadcast each week, there is no doubt that the Raiders are heavy editors. “Maybe Jackson and Haley were both dismissed in the midseason for internal crushes that have solidified for Gruden and Mayock that little net stuff can come from cameras everywhere.

Hard Knock's producers seemed to offer a mea culpa by leaving us with a pearl. At one point during training, Gruden Brown asks if his feet hurt.

"When it's really hot that the shit starts to burn, I have to take off my shoes," Brown says.

"Why don't you go to a cryo chamber?" Asks Gruden.

The Duality of Man

In one of the finest editions in film history, Hard Knocks captures a conversation between tight ends coaches Frank Smith and tight end Darren Waller where Smith tries to convince Waller to watch Fight Club. Smith explains that it is about "the duality of man, the good side and the bad side." quarterbacks Mike Glennon and Nathan Peterman.

The majestic voice of storyteller Liev Schreiber takes over: No. 7 Mike Glennon and No. 3 Nathan Peterman understands yin and yang. Light and dark. [19659025] Gruden's demand for Glennon and Peterman to be more self-adhesive on and off the field has been one of the best sub-plans in the entire series, as Gruden tries to rehabilitate former Bill's punch line Peterman. [19659026] Yet Gruden is not happy with the (lack of) progress Peterman is making, and on the question of whether he wants Glennon or Peterman to play the majority of their next preseason game, Gruden spends a solid seven seconds making this face: