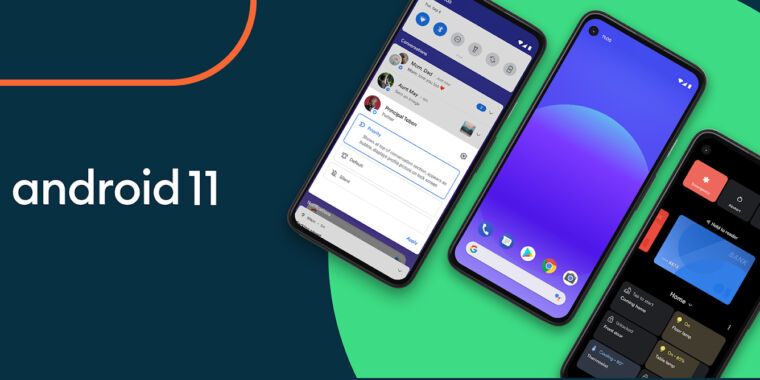 Android 11 has finally arrived after a long beta process that started about three years ago in February 2020. This is the 30th version of Android, if we count API levels, and in a year when it seems like everything has been delayed or canceled, Google has managed to acquire one of the smaller Android versions.

0 was a massive release and added gesture navigation, a dark mode, Project Mainline, a dual-boot system, storage space, foldable smartphone support and a million other things. In comparison, Android 11 is more limited. This is the annual Ars Technica review, but of course there are still many things to talk about – such as yet another message panel renewal, a new media player, chat bubbles, smart home controls and more.

The Notifications panel is one of the biggest strengths of Android, and Google can’t seem to let a major release go without going through it. This year, the theme seems to be about organizing and creating what Google calls a “dedicated perseverance space” for certain types of messages.

Messages are now divided into five categories, some with large headings on top of each section. Messages “Conversations”, “Messages” and “Silent” get the big headline labels in the notification panel, while ongoing messages from things like Google Maps navigation do not get a label but are attached to the top of the panel. The fifth type is for media notifications, which now live inside Quick Settings panel. This is a wild change.

To make room for the media player, the icons for quick settings are now down to six icons per page, where previously there were nine icons per page. So you swipe down the notification panel and see six objects at the top, and when you expand the Quick Settings panel, you see … the same six icons. It does not make sense.

The media registration space supports multiple players. If you have recently launched more than one media app, you can swipe horizontally through multiple media players, which is great for switching between a music player and podcast app. It’s up to each app to keep a place for itself in the media player carousel, which can accommodate up to five apps.

Apps can probably secure a permanent place in the media player by calling the new “MediaBrowserService” API. I do not think any apps actually do that right now, so it’s hard to know how it works. Google claims that apps that ping the new API will stick to the media player’s carousel forever (sorted by when you last used them), even after a reboot. If any app actually implemented the persistent behavior, you could turn it off by swiping over the media player, pressing the small switch that appears below it, and enabling the option to “hide the player when the media session is over.”

The media player has a new output selector button at the top left, and when you press it, you get a pop-up card with audio devices. Right now, this tends to list things like “Phone Speakers”, “Wired Headphones” and the names of all connected Bluetooth devices. Since this is all that the buttons ever list right now, it’s not very useful.

Google’s developer documents show Google Cast devices, such as Google Home speakers and Chromecasts, appearing in this list, which would be incredible. The documents say “By default, only local media routes are displayed. If your app supports other media routes, such as remote playback, you must notify the system.” “Remote play” here means Google Cast devices, with a “Google Home” and several other speakers appearing in the accompanying image. So whether Google Home speakers appear in this list will be up to each individual app. So it needs to be updated.

For developers, the recommended way to get Google Cast speakers in the sound selector for your app is to include version 1.2.0 of the MediaRouter jetpack library and enable some remote playback flags. The problem is that this version of the library is still in beta. This means – and this will probably be an ongoing theme in this article – that as far as I can tell, no apps support this Android 11 feature yet.

I think the details of how the new sound selector will work with Google Cast devices are a big deal, because the current Google Cast interface (accessible via the “cast” button in an app) is probably the single worst interface shipment on a modern Android phone. It reminds me of the stock sheet issues that existed before Android 10. The Google Cast list in an app is built while driving, so when you press the cast button, you first get a blank sheet and then it fills up slowly when the app pings speakers in your network as if it takes the presence of a classroom. Not all speakers appear at the same time, so the list jumps and shifts when presence is taken. It is common for you to see the speaker you want, tap it and exactly 1 millisecond before tapping the screen, the list is updated and the wrong item is moved to the location under the finger.

The list is also sorted alphabetically, not by something more useful such as “most recently used” or “most commonly used”. It is also an accident with speakers and speaker groups, and there is no way to hide speakers that you never start individually or mark certain list items as important. This is crazy, because when you create a speaker group, you probably want to start the speaker group and never a single speaker. At the moment, the list is not even smart enough to put speaker groups at the top.

I really like idea of the new media controls. Switching between apps with a quick horizontal swipe is convenient. For the most part, all I want to do is resume the latest media I played, and having a list of my latest media sessions would be a super easy way to do that. As someone who normally has some media player widgets on my home screen for easy launch, a persistent media player seems like an ideal feature. The problem right now is that nothing is actually sustainable. No apps turn on persistently, so many times you look for the media player and it’s just … not there. It’s pretty disappointing to open the quick settings and expect to use your favorite media app and that it’s missing. After a few missed connections, I just gave up trying to use the Quick Settings player. Without persistent mode, it’s more or less identical to the old media release, only with the cool multiplayer support.